Alaska, they say, starts fifty miles outside of Anchorage. That speaks to the truly metropolitan feel of the largest city in the state. Truthfully, it is much closer than that. Chugach State Park just east of the municipality is as wild as Yellowstone and mostly accessible only by foot. Eklutna Lake, Peters Creek, and Eagle River are trailheads, and you can find places to land an airplane up near Lake George. 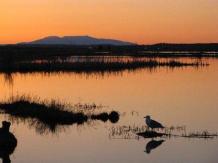 The park is controlled wilderness. West of Anchorage is Mt. Susitna, better known locally as Sleeping Lady. There is a Native legend about the mountain involving a tribe of giants, and the mountain is the lady giant awaiting the return of her man. As luck would have it, Hawaii has a male version of a similar story.

Getting Home is as Alaskan as it gets. Don Sackett joins his friend John on a fly-in moose hunting trip to the upper reaches of the Yentna River, just south of the Denali Park, west of Mt. Yenlo, and north of Johnson Creek. One of the things that often kill bush pilots is the idea they “have” to be some place, and Don has a plane to catch to Seattle. Weathered in for most of a week, there is a lull and looks like an opportunity to get back to Willow in time to catch his flight.

Weather is always a tricky thing, and the break in the weather gave hope. Only it was caused by a strong frontal system from the southeast that creates a rare, late-season line of training thunderstorms, which force our pilot farther and farther south and west—eventually trapping him against Mt. Susitna, where darkness and storm cause him to lose sight of the ground.

Aircraft accidents are almost always a result of several things going wrong, one after another. Don is flying in a newly rebuilt Piper Super Cub that he is not totally familiar with, and on top of weather, he experiences electrical failure and loss of communications. Turbulence forces him to keep his hands, feet, and mind on flying the light aircraft rather than troubleshooting the electrical failure, which might easily have been a fuse or breaker and quickly remedied.

The average pilot in such situations, often as not, crashes within minutes of losing sight of the horizon. Rising land mass and no way to see it, Don flies, first, over a clandestine drug lab run by the Hell’s Angels, then shortly beyond into the trees. His flight in

structors always said it wasn’t the flying that killed you, it was the sudden stop. In pilot jargon, you are considered “down” once you have exceeded the time it would take for the plane to use the available fuel. Six hours is about the flying time for a fully fueled Cub with standard tanks to run out of gas; after that, gravity will win.

Don manages a good landing as the plane rips apart around him, eventually impaling the largest portion of the wreck on a spruce tree just off the ground. After several hours in and out of consciousness, he manages to extricate himself from the wreck and, although suffering a concussion and severe bruising, manages to walk away. In the life of a pilot, any landing you can walk away from was a good landing.

The ever-vigilant Hell’s Angels hear the plane go over in the storm and suspect that it has crashed. A search is undertaken to hide the wreck and make certain there were no survivors. Besides the drug business to protect, they have a special guest in camp suspected of being an informant for the FBI—a prostitute named Jody was being held and questioned with the expectation that her flight in had been a one-way trip.

Don is left to wonder why he has survived and, seemingly, accidentally avoided detection by the Angels. Then, Jody manages to escape into the wilderness, not dressed for the cold, and stumbles into Don’s life nearly frozen and with bikers now looking for them both. Chances of survival are slim to none without God’s help.

Don has his hands full and Getting Home gets even more interesting. A tale of survival, crime Alaska style, and just Sackett’s run of the mill luck makes a hell of a story. A story that brings you into the epic beauty of Alaska’s wilderness and the deadliness that comes from living on the Last Frontier.